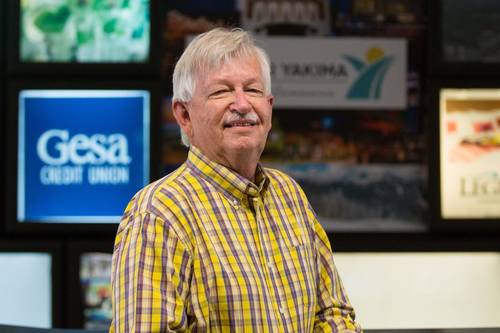 The Ted Robertson Community Service Award was established in 1989 by the Greater Yakima Chamber of Commerce Past Presidents/Board Chairs to honor individuals each year that have made significant contributions to the betterment of the Greater Yakima area. Ted Robertson, former publisher of the Yakima-Herald Republic, held a strong belief that good fortune earned in a community should be shared with that community. Ted also believed that we, as a community, ought to find more ways to honor people who distinguish themselves through their community service over and above their chosen profession.

The honorees are selected by the Past Board Presidents/Chairs of the Chamber for their inspiring leadership, achievements and commitment to the improvement of our community as business people and citizens of the
Yakima Valley.

The Past Chairs of The Greater Yakima Chamber of Commerce are proud to announce John Baule as the 2019 recipient of the Ted Robertson Community Service Award.
John Baule graduated from the University of Dubuque with a B.A. in Mathematics & Physics. John also has a MA in History Museum Studies from Loras College and a Mini- MBA in Non-Profit Management. John moved to Yakima in 1992 to become the Director of the Yakima Valley Museum.
John has served on boards for; Downtown Association of Yakima, Yakima Valley Visitors & Convention Bureau, and the Yakima Valley Rotary Club. He has also provided leadership to many local organizations.
John will be honored as the Ted Robertson Community Service Award recipient November 7th, 2019 during the Annual Chamber and Ted Robertson Community Service Awards celebration at the Yakima Convention Center.
Photo credit: Amanda Ray, Yakima Herald-Republic