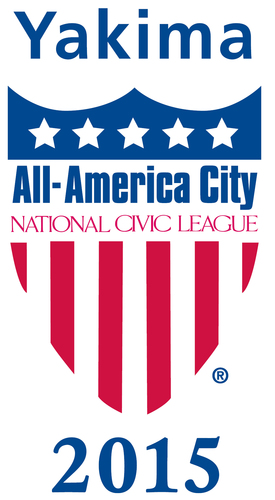 Yakima Captures Second All-America City Award
Try, try again. That motto certainly applies to Yakima’s efforts to be named an All-America City. During a ceremony June 14th at the Sheraton hotel in downtown Denver, Colorado, a group of 25 people from Yakima hugged, high-fived, and celebrated when Yakima was announced as one of the communities receiving a 2015 All-America City Award.
“Thrilled and proud,” was how Joe Mann described the reaction of the Yakima delegation. “We
worked very hard for this. Congratulations are due the group who came to Denver and got the
win and to everyone back home who had a hand in it,” said Mann, a local business owner and
chair of both the Greater Yakima Chamber of Commerce and the 2015 Yakima All-America City
Committee.
Last year Yakima was named a finalist for the coveted civic award but was not among the ten
cities to receive the prestigious designation. Determined to give it another shot, a group of local
leaders led Yakima back to the finalists’ competition in Denver again this year and got the result
it was after.
Not giving up after falling just short of a win last year mirrors an effort about two decades ago
that led to Yakima’s first All-America City Award. In 1993, Yakima was an All-America City
Award finalist but did not end winning the sought-after designation. The next year, another
campaign was mounted, Yakima became a finalist, and did win its first All-America City Award.
Billed as the oldest and most prestigious community recognition designation in the U.S., the All-
America City Award has been presented by the National Civic League since 1949 to
communities that utilize collaboration and innovation to address pressing local problems. Ten
or more finalists receive the award each year based on an application, a 10-minute presentation
to a jury of nationally-recognized private and public sector leaders, and a 10-minute question
and answer period during which the jury asks presenters about their projects.
Yakima’s 2015 application and presentation highlighted the Yakima Gang Free Initiative, the
Perfect Attendance Creates Excellence program, and the 100 Jobs for 100 Kids project.
Most of the Yakima delegation will return home tomorrow (Monday, June 15th) on a Horizon Air
flight that is scheduled to arrive at the Yakima Airport at 5:40 pm. The group will have its 2015
All-America City Award in hand.
“The fact that Yakima has now won the All-America City Award twice is a testament to our
community’s ability to take on its toughest issues and work together to solve them,” said Mann.
“The All-America City Award is given to communities that don’t shy away from adversity, join
forces to tackle difficult challenges, and never say quit. Those qualities definitely describe
Yakima,” said Mann. “Winning the All-America City Award again absolutely confirms what a
wonderful community Yakima is.”
To learn more about the All-America City Award and to see a complete list of the 2015 winners,
click on the following link - http://www.nationalcivicleague.org/allamericacityaward/.